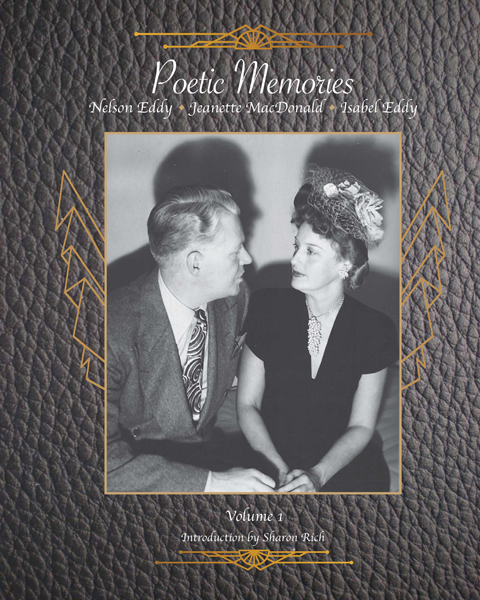 When I was writing Sweethearts in the early 1990s, I was fortunate enough to have access to over 400 original postmarked letters written in the 1940s, containing very private information and quotes from diaries and letters by Nelson Eddy or Jeanette MacDonald, as well as many typed pages from the in-progress memoirs of Isabel Eddy, Nelson’s mother. As we know, she lived vicariously through her son’s success and she came to love Jeanette as a daughter-in-law. After verifying the letters and various sources connected to them, and then reading hundreds more pages of detective work done at the time these events were happening, a decade that had little known public facts about it suddenly came to life. Jeanette MacDonald and Nelson Eddy left MGM; the war intervened, but curiously they did several radio shows together during the decade even though they had no new film projects together to promote. Hollywood sources who’d known them during the studio days had no real idea of what went on in their lives afterwards.

I thought this would be the most difficult decade to cover in the book, due to so little contemporary knowledge. But “the Isabel letters”, as I nicknamed them (because what she didn’t write herself she leaked), were a goldmine and filled in many of the blanks. Then it was a matter of how much mushy, loving or spiritually-themed letters and quotes could be used without defying belief. After all, this is Nelson Eddy, the stouthearted singer and supposedly stodgy movie star we’re talking about, not a romance novel. And this is Jeanette MacDonald Raymond, who goes all out to show us (in endless publicity shoots at her home and Hollywood events) how madly in love she is with her legal husband. It’s real Twilight Zone stuff, folks.

For all the quotes I used to show how obsessive and possessive Nelson was about Jeanette, and how he brought out “a fiery passion” in her (Nelson’s words; see below), there are many more that I didn’t use. In some cases they weren’t needed or incidents were redundant; I had to pick and choose.

In this new book release (now released in 8 volumes), I’ve reproduced 8 scrapbooks from the 1940s with more quotes culled from the original source material, and put together by one close to the scene as it was happening. I’ve written an illustrated introduction to the scrapbooks to fill in the back story.  If you’ve read Sweethearts, you’ll recognize some of the quotes. I highly recommend that you read the latest edition of Sweethearts if you haven’t done so, because you’ll have a better grasp of the context of the other quotes. However, as this is a coffee table type book series, anyone browsing through them will realize that the smoldering looks and intimate touches they exchanged in their films, both physically and in song, wasn’t “acting”. This is who they were; it’s like they stepped off the screen and continued playing their sentimental, romantic characters in their own secret universe.

Here’s one of the quotes in Poetic Memories written by Nelson about Jeanette:

“I shall perhaps want you to lose all prudence for awhile,
To give me the wine of the Gods many times.
Till I am drunk with its charm and sweetness.
That I may remember for all the ages, the fiery passion of you.
And never forget the passing of this hour.” *

The book series is a Limited Edition and can only be ordered at this link. Enjoy!